Sue Boyd has been telling us for years that she has the attention span of a gnat, which means she flits from one new thing to the next regularly.  So when she decided to have a crack at an offroad event, we hit her up for a race report to tell us a little more about the other races our members enter other than standard triathlons.

This October long weekend, I was meant to be riding in the Grand Tour of Hope, a 600km + ride around the scenic rim of South East Queensland.  However due to a number of setbacks, I was unable to fulfill my training to get “match fit” and had to withdraw from the event a month out from the ride.

So to commiserate, Brendon and I decided that a camping weekend was in order.  Now as is normally the case, said camping weekend was organised around an event!  I can’t remember the last time (other than Easter) we went camping just to relax.  Everything seems to rotate around triathlons, bike rides – always something organised.

This weekend’s event was G’onya Adventures’ R&R Railtrail Experience, a duathlon set on the beautiful Brisbane Valley Rail Trail between Blackbutt and Linville.  It’s a great place for an event, with transition set up in the Blackbutt showgrounds, which is also the town’s camping area, so very limited travel early in the morning for those of us choosing to stay overnight.

Brendon entered the event as an individual, but with my running training since the Enduro in March amounting to about two hit outs, I figured I wasn’t anywhere near ready for a full event, so I asked Hayden (my fourteen year old son) to do the event with me as a team, where he would run the 5km and I would ride the 18km course.  To my surprise and delight, he said yes.

Now I had tried to convince him that he needed to train for the event, but let’s face it, to a fourteen year old boy, who thinks he’s ten foot tall and bullet-proof, my arguments fell on deaf ears.  To avoid the inevitable fight that would ensue, I let it go and decided that the run was his issue and not mine – I just had to manage the bike!

So on Saturday morning the Boyds packed the camper trailer, put the new puppy in the car (we left our older Rottie cross, Hercules at home – he’s riddled with arthritis and the two hour ride would have been extremely painful for him in the car) and began the trek to Blackbutt.

A non-eventful drive out, we found the campgrounds, set up camp and made our way into town (a walk of about 300 metres).  For those of you who have visited Blackbutt, you’ll know that the best place to eat is the Blackbutt Bakehouse – best pies for miles!  We sated our hunger (some with a pie and a yummy slice, and some with just a couple of pies) and made our way back to camp for the afternoon.

Brendon had a short nap during the hotter part of the day, and then we mounted our trusty mountain bikes and headed out on course to check out the next day’s ride.  The course is ridden over the rail trail, so not really an MTB event, but certainly not suited to the roadie.  The trail is a combination of surfaces, including gravel, sand and grass, with three steeper descents in and out of areas that would once have had a bridge for the train to cross.  These three spots are really the only place that truly require a mountain bike.  The guy who finished second in the 30k run/30k ride event actually competed on a cyclocross bike.

The organisers had also planned a surprise for the turnaround point on the ride, and we stumbled upon it when we rode the trail.  Fettler’s Rest is a rest area on the trail that has some interesting history from the area set off the trail. 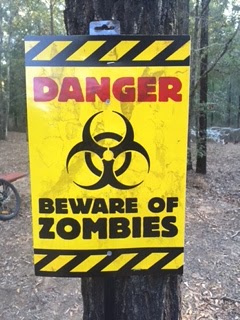 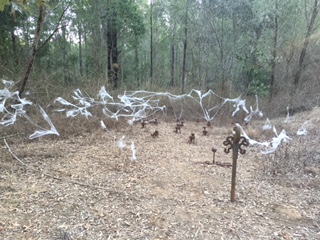 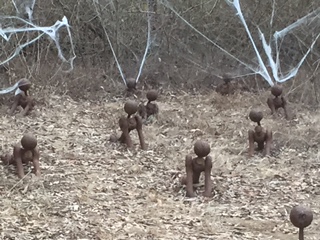 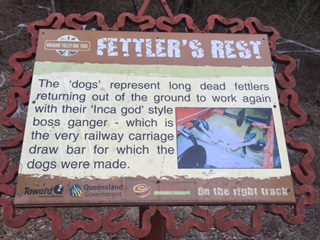 The bottom picture explains it all – these “dogs” which are part of the connection rig for carriages have been abandoned by the side of the trail and if you look at them the right way, they appear to be people dragging themselves out of the ground.  Ironically, I was talking to the first two place-getters for the duathlon after the race and neither of them had noticed the “Beware of Zombies” sign or seen the dogs – they were too intent on racing.  So once again I’ve shown that being competitive isn’t all it’s cracked up to be, and if you don’t look, you’ll miss so much (well that’s my story and I’m sticking to it!)

And so back to camp, a dinner of chilli and an early night.  The temps during the day were quite warm (mid-late twenties) but dropped to single figures overnight.  Good camping weather where you can snuggle down in your doona and enjoy the outdoors. Oh, and the stars.  I’d forgotten how absolutely wonderful it is to star gaze when light pollution doesn’t drown out the light, the Milky Way in all its glory, the familiar constellations woven across the night sky.

A not so refreshing night’s sleep (that dodgy shoulder was proving that riding a mountain bike is a lot tougher on the top half of the body than my roadie) and we got ourselves ready to race.

While the event is sanctioned by TQ (there was even a TO on course – Lyndall who was my Event Coordinator at Cairns Ironman), it is marketed as a family friendly, informal day on the trails.  The start line was unique in that the 30/30 racers started on the right of the start line and the duathlon and 8km runners started on the left – facing each other!  The 30/30 racers got a good start on the riders to avoid too much traffic on the trails. 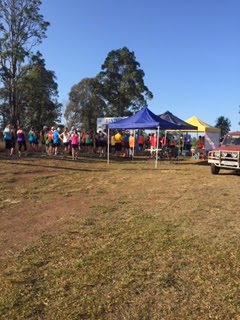 The second unique part of the day was transition – all the regular rules applied – helmet on and done up before you entered, but no racks – just plenty of posts to lean your bike against!  A great chat with Tom, whose wife Meredith (I hope I’m getting this right) is the organiser of the event.  Can you believe it is a small team of 3-4 who pull this whole thing together? 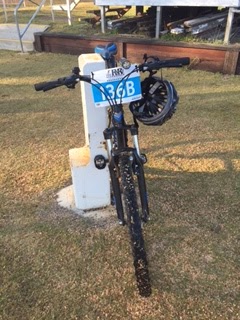 The third unique part of the day was the event was started by a blast from a steam train whistle.  It’s the little things like that that really made the day so special.

We started off just after 7.15am, and I made my way back to camp for a short check on the puppy before heading to transition and waiting for my boy to tag me in.  Was really pleased to see Brendon come in second on the run and head out on the trail and finally it was my chance to get on the bike and have a crack at the course. 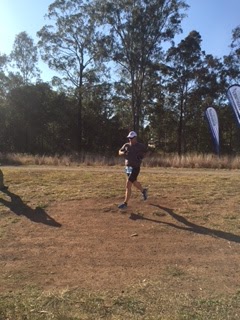 About 7 of the 9kim on the way out was downhill, so cruising speed was pretty good on the way out.  The ride back was of course a mirror image of the ride out, so a little tougher through the constant uphill.  Don’t get me wrong, it wasn’t a tough climb gradient-wise.  It was just that it was a constant uphill.  Ignoring the legs and mentally working through the pain barrier was a great way to make the kms just slip away.

Now as I’ve already said, while this in not traditional mountain biking, it does take a lot of concentration to maintain a good line, navigate some of the gravel or sand areas that soften the trail, throwing the back tyre off and watching for the roll overs that have been built into the trail to reduce water erosion during the wet season.  Hitting one of those too fast can result in some air – something that a beginner mountain biker really isn’t ready for and can result in an “off”.  The ups and downs to get in and out of the gullies were exhilarating, and are fast becoming some of my favourite obstacles on the trails.  I’m beginning to think I like this form of riding just that little bit more than road riding.  I can’t really describe the feeling, but I just know I really love the rush.  On a roadie it is so easy to get lost in a conversation and not really see what’s happening on the road.  On the mountain bike, even something as simple as taking a hand off the bars to reach for your water bottle can have harsh consequences.  It sure is a dirty business though.  I’m used to road grime on the roadie, but wow, that dirt from trail riding is a cracker! 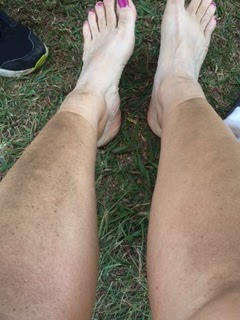 Anyway, back to the race.  Navigated the return journey without incident, ran into transition, tagged out Hayden, had a quick conversation with a few of the other racers and found my way to the finish line to watch my boy finish our team event.  Once again, the organisers were amazing, cheering us over the line, congratulating Hayden for having a go, and giving us all of the details for next year.  Sadly, they are looking at moving the event to the first weekend in May, which means Brendon’s Ironman Australia will take precedence and we will miss out.  Totally understand why they are moving it though – they are trying to avoid the magpie swooping season, as those vicious little buggers have been a problem the last two years swooping runners on the trail. 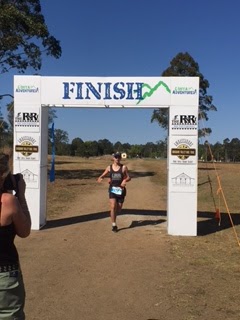 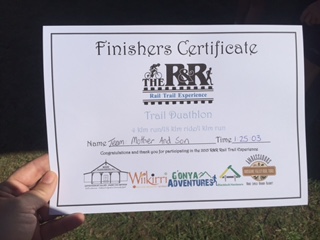 The Boyd family cleaned up at presentations, with Brendon and the team winning spot prizes, as well as finishing third overall male (Brendon) and third in teams (Mother and Son).  Looking at the race results today, poor Brendon didn’t even get any higher in his age category – the two guys who beat him were both also in his age group! 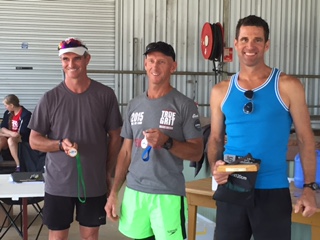 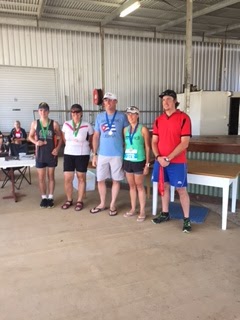 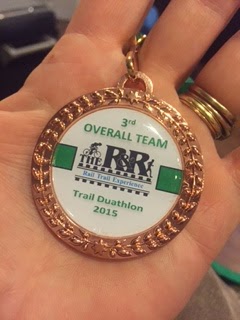 Hayden has realised how valuable preparation is prior to a race as he has pulled up sore not just immediately after the race, but after a good night’s sleep he is a little stiff and sorry for himself.  Lesson learned, and he is now talking about doing a bit more regular running to keep his fitness levels up.

So another fun event, another unique challenge and another thing to look forward to in future. Being such a relaxed event, this is a great option for beginners and those new to the mtb experience.  I’d love to go back some day with a larger group and enjoy the fun of camping with a large group of athletes from our club.

The G’onya Adventures team also organises the Lamington Eco Challenge in August 2016 – so we will put in some training to get to that event next year to show our support for a great group of people and the events that they put together for the love of the sport.  In the meantime, I’m busy googling offroad adventure events to find our next (closer) event.

Oh and Indie, our puppy?  She survived the weekend.  She will make a great camping companion if we can just train her not to bark at horses and other dogs!

Sue loves to blog – if you don’t mind reading her stuff, you can find more of her posts at http://teamboydarego.blogspot.com.au/

All our training updates, events and communications are on the app.